A celebratory dinner took place on Saturday 20 August at the Olde Horsham Inn to celebrate 70 continuous years of continuous membership and service of Ron Abbott with the Horsham City Pipe Band. 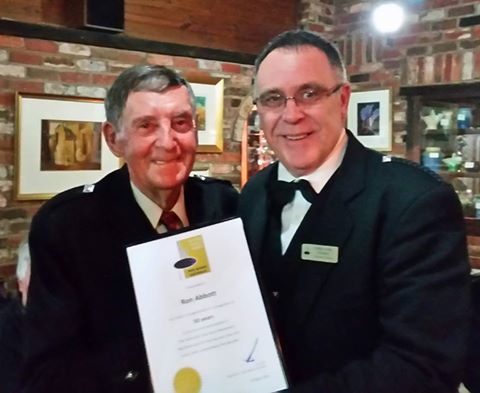 Ron, a long time former Pipe Major of the band, began playing with the band as a young boy, and has been a teacher and mentor for many people over his lifetime. Many of Ron’s pupils have gone on to play with other bands and further their piping careers to a high level. Past pupils have played all around Australia and the world, including performances at international tattoos, the Royal Edinburgh Military Tattoo, and competing at a high standard of competition, both in solo contests and with bands.

Pipe Bands Victoria are delighted to celebrate Ron’s achievement, and the Branch and the VHPBA were represented by Vice Chairman Chris Earl at the dinner. In addition, in his concurrent role as President of Pipe Bands Australia, Chris presented to Ron the very first 50-year certificate under the new Pipe Bands Australia recognition awards.

We are pleased to hear that Ron still actively participates and performs with the Horsham City Pipe Band, and continues to be such a positive contributor to the overall pipe band scene in Victoria.