The 2014-2015 Victorian Drum Major’s Solo Flourish Championship will be conducted over three competitions during the season with the winner to receive the inaugural L.L. (Lew) Zilles Memorial Trophy.

Pipe Bands Victoria has named the new trophy in honour of a founding father of the Victorian Highland Pipe Bands Association. On New Year’s Day 1924 at the Maryborough Highland Gathering, Lew Zilles called a meeting of bands to discuss forming a new association that was officially established a few months later at a meeting in Geelong.

Lew was drum major of Ballarat Highland Pipe Band for 50 years from 1920 and also had a long association with brass bands and marching girls. He was for many decades a judge in all three disciplines and an early author of dress and drill manuals, including display diagram formations.

A militia officer, Lew was also involved in community affairs in Ballarat for most of his life and operated a printery. He was awarded the Medal of the Order of Australia for his community service.

The first leg of the Victorian championship was conducted at the recent Daylesford Highland Gathering with remaining events to be held at Geelong and Ringwood. The inaugural L.L. (Lew) Zilles trophy will be presented to the champion solo flourish drum major at the Ringwood gathering. 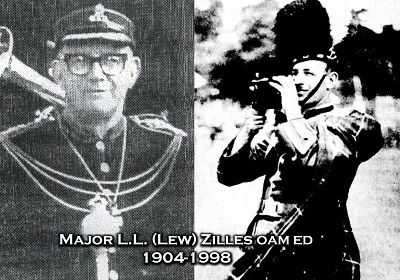